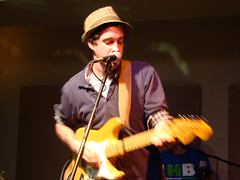 On Thursday April 15, 2010, City Dwelling Nature Seekers blew the roof off The WYEP Community Broadcast Center for Third Thursday. They played stuff from their self-titled EP (including "Will and A Way" which was featured on The Local News) and also an upcoming release. Check out the recording from that night on the recently posted Third Thursday podcast. It's on your Mp3 player or listen below. More photos here.